According to our Terms of use, it is prohibited:

- to use analysis software without having an account accompanied by a (C). (C for Computer)

- to lose games intentionally or accepting multiple wins from a player who loses games voluntarily.

You can immediately add the player to your blacklist. Such a list can be managed in the "Live Game" site, or directly in the game interface. So that player can no longer annoy you.

If you see or suspect a player to break these rules, you can submit this game which is considered to be suspicious for verification within 24 hours.

Request for verification of a game

At the end of a game, on the right side of the interface, you will see the appearance of an exclamation mark. Click on it and select "Cheat". A window pops up allowing you to choose the game in question, and then to validate your request, which will trigger verification. 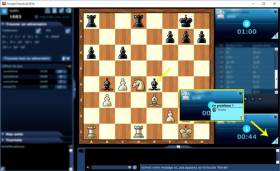 After the analysis of an administrator, if cheating is proven, the result of the game will be amended, Elo points will be recalculated and sanctions will be applied. If the game was played in a tournament, the tournament will be accordingly recalculated. The dishonest player will receive a regulations reminder and will be informed of the applied sanctions.

His opponents will also be informed that an action has been taken on one of their games.

In any case, the complainants will be informed of the actions taken on their report.

Sanctions that will be applied to the cheater will be the following:

- If this is the first time, players will receive a warning that will be kept on their file.

- In case of recurrence, players will receive a final warning before account suspension.

- In the third warning, the account will be suspended.