This double round Scheveningen event involved two teams of five players, one being of experienced players averaging 42 years-old and the other being made up of five youthful players with an average age less than half their opponents!

Anish Giri and Hikaru Nakamura scored best for the 'Rising Stars' with 6/10 whereas Boris Gelfand was the highest overall scorer with 7/10.

The team result was as follows:

The tournament was played in the NH Grand hotel Krasnapolsky in Amsterdam with the collaboration of generous chess benefactor Joop Van Oosterom, who is also responsible for the Melody Amber series.

Here are some particularities of this unique event:

1. Rate of play: 40 moves in two hours, followed by 30 minutes plus an increment of 30 seconds per move.

3. There is a special bonus prize for the ‘Rising Stars' team: the player with the highest score will be invited to the 2011 Amber Blindfold and Rapid Tournament in Nice, provided he or she scores over 50%.

See below for the play-off to earn this coveted place! 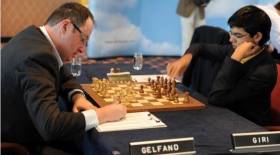 Gelfand's seven points enabled him to amass 12 welcome rating points and Giri, despite a last-round loss, gained the same amount.

With Nakamura and Giri both finishing on 6/10 a Blitz play-off match was organized to determine who would earn the right to play in the prestigious Amber event in 2011.

Of course Nakamura isn't only the higher rated of the two, he is also well-known as one of the best Blitz players in the world.

So there was no surprise in the play-off. 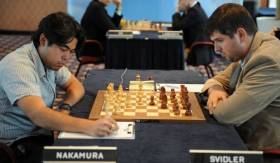 It will be great to see Nakamura playing in the Melody Amber tournament.