Bursa is Turkey's fourth largest city and is just south of the Sea of Marmara in north-west Anatolia, so is in Asia but only a few kilometres from Europe!

The ten teams have the following reasons to be present:

The three continental champions (of 2008) are Russia, Brazil, Egypt.

China could have been a fourth, but withdrew quite late and were replaced by India.

There are four players plus two reserves in each team.

One particularity is that draw offers cannot be made before move 30 and as usual 'zero tolerance' for late arrivals!

Here are the results of the first two rounds:

United States and Azerbaiajan have won their first two matches.

Egypt and Turkey have lost both of their matches.

In the first round, Azerbaijan (European champions) overcame the Olympiad Champions Armenia. 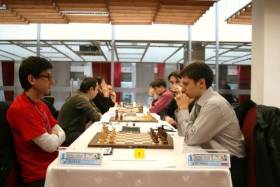 The Greeks beat the Russians in round 2!
© official site

In the second round, few would have expected Greece 2.5-1.5 Russia (Papaioannou with the black pieces beat Morozevich and Banikas beat Tomashevsky).

More tomorrow with the third round including the match Russia-USA!