The other Wang, and Chinese number two Wang Hao, beat Ni Hua in the final round and thus made it up to equal first with Bu and Zhou Jianchao.

The three tieing for first had performances around the 2680 mark.

Wang Hao was declared winner on the first tie-break which was based on 'results in the same score group' (he drew with Bu and beat Zhou Jianchao, whereas the other two drew their encounter).

The name Xinghua may mean very little to westerners, but this city of 1.6 million souls in eastern China can be found on maps in the centre of Jiangsu province. It is actually the birthplace of Hou Yifan.

Here are the final positions with the player's relative rankings.

Wang Hao won't have won any rating points here, but his victory last month in the Sarajevo open means that he has gained enough rating points to take him (provisionally) into the World top twenty.

The two 2300s are untitled and clearly less experienced than the others however Lu Shanglei is still rather young (he was born in 1995) and made a good showing with a 2541 performance. Certainly a name to look out for.

You may also like to investigate the official tournament site. A working knowledge of Chinese would help!

The couple who were equal first, but unlucky on tie-break, are also in the World's top 100. 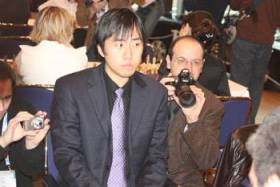