Travelling to Argentina is a long journey for most of the chess playing world. However 52 nations managed to send at least one particpant to this year's World Junior Championships in Puerto Madryn.

The highest rated of the 87 participants in the mixed event eventually made his way to the top of the podium, but only just! The title was for much of the event an exciting two-horse race between Frenchman Vachier_Lagrave and Sergei Zhigalko from Belarus which remained in doubt until the very end.

The two players met and drew in round 6 before making their way to a joint lead on 6.5/8 and then 7.5/9. Zhigalko won in round 10 to get his nose ahead, but was caught in round 11 after drawing while the Frenchman won. In round 12 the Belarussian became sole leader and strong favourite after winning whereas his rival only drew. So going into the last round with an extra half-point plus the White pieces against Popov (2582) he knew that his destiny was in his own hands. Vachier_Lagrave also had White but had to face the highest possible rated opponent, Russian Andreikin, who with 2659 was the second seed. Zhigalko drew whereas Vachier_Lagrave won the following game and became champion due to his slightly superior tie-break. 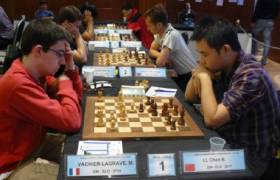 The title challengers in action in Argentina.
copyright: official site.

He is the second Frenchman to receive this award as Joel Lautier won in 1988 in Adelaide (before Maxime was born!), also coincidently in the southern hemisphere!

The leading pair achived an impressive 10.5 points, a full one and a half points clear of the third placed player Olszewski from Poland.

In the Women's event Soumya of India won on tie-break ahead of Cori Tello of Peru and Yildiz of Turkey. 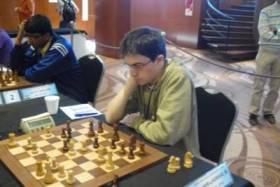 Maybe 7...d5 is more logical as then White might regret not having access to c3 for his knight!

With a bind on the left-hand side of the board.

Ambitious, but Black has to find a few muscles to flex somewhere!

A change of strategy. The opening of the position should suit White, as Black's queenside is rather tangled up.

Occupying the hole on f5 demonstrates the downside of playing an early ...g5. 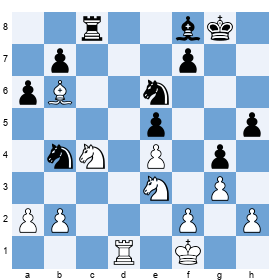 White activates his knight and seeks some soft spots in the opposing camp.

Now White's knight is quite useful on d7!

Two extra pawns should be enough, but Vachier_Lagrave still has to be vigilent with Black's pieces being so active.