Carlsen was in a combative mood right from the start and met Ponomariov's Sämisch variation with both ...h5 and ...b5 in an attempt to seize the initiative. Later Carlsen even sacrificed the exchange for dangerous attacking chances, but the Ukrainian returned the material accepting a disadvantage. Carlsen converted his advantage in a minor piece endgame.

Wang Yue avoided going into the main theoretical lines and sought to maintain a pull by occupying the d5-square. Gelfand however successfully traded pieces until opposite bishops persuaded the players that there were no winning chances.

Teimour Radjabov brought his queen's rook to the kingside at an early stage, so Nisipeanu wisely refrained from castling. Later it was touch-and-go whether the rook was 'active' or simply 'misplaced', so Radjabov (who probably had his doubts!) sought to trade off this rook and offered a draw in a fairly unclear position.

Nisipeanu accepted and finds himself in fourth place a point adrift of Radjabov and Gelfand who are now a whole point behind the leader. 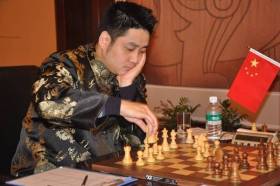 No wins yet for Wang Yue.