Viswanathan Anand and Ian Nepomniachtchi were the first to finish, with Black obtaining perpetual check against White's exposed king.

Vladimir Kramnik and Magnus Carlsen also led to a draw in a similar fashion, but only after wild complications. Carlsen decided to sacrifice the exchange to release the pressure, which led to Kramnik playing the remainder of the game with his knight in the corner. The Norwegian walked his king from the centre to the queenside in a bid to get organized, whereupon Kramnik switched wings with his queen which earned him a draw.

Peter Svidler took the initiative with an exchange sacrifice which enabled him to place White's centre under siege. Nakamura gave back the material, but could do no better than get an endgame a couple of pawns down for the more active king. Svidler had no problems converting his advantage in the knight endgame, as White's king was too distant to put up much resistance. 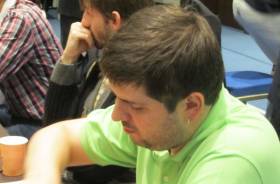 Levon Aronian's win came after he provoked Ivanchuk to advance his 'e' and f-pawns. This rebounded on the Ukrainian, as his centre became weak and was soon gobbled up by the thankful Armenian.

The last game to finish was a tense struggle between Boris Gelfand and Sergey Karjakin, which turned in Black's favour towards the first control. Then despite his dangerous-looking rooks, Gelfand suffered due to a pin on his knight, and had to make all sorts of contortions with his major pieces to save the steed. Although Gelfand stayed as active as he could, Karjakin's extra pawn and superior minor piece enabled the young Russian to gradually overcome the defence.

Here is a summary of the third round games:

The table after the third round:

Details of the earlier games:

Both of today's photos are our own and were taken last week in Porto Carras.

More information from the official site: