Only one of the 2700+ players has 3/3, Francisco Vallejo Pons, who is finding the going a little easier than in his previous tournament!

There were 52 players on a perfect score but after the third round this number was down to 13.

In the Women's event Stefanova had dropped a half-point (in round 1 against Meri Arabidze 2292 from Georgia) but second to fourth seeds remained on 100%. The Kosintseva sisters both had the White pieces but while Tatiana won, second seed Nadezhda only drew. These weren't the only sisters on the leading boards, as Anna and Mariya Muzychuk were up there too, but both drew with Black today.

So the four players on 3/3 are Tatiana Kosintseva, Ketevan Arakhamia-Grant, Monika Socko and Irina Chelushkina with one game remaining. 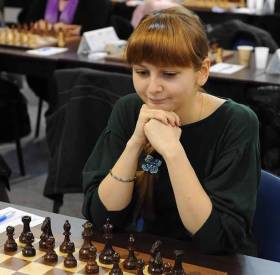 Only a draw for Nadezhda Kosintseva but her sister won.
© official site