No one seems willing to take big risks in the final!

Ponomariov opened with 1.d4 (avoiding Gelfand's ultra-solid Petroff defence!) and Gelfand reacted with the Slav. The choice of the low-risk 4.Qc2 variation by the Ukrainian, is symptomatic of the whole final so far. With Black reacting with a kingside fianchetto and the centre opening up, play resembled a Grünfeld Defence rather than a Slav.

White had a central majority and extra space, but the wily Israeli brought his king across the board and activated his rook while Ponomariov was grabbing a pawn. At the end there was nothing better than taking a repetition, otherwise Black was ready to seize the initiative.

Let's hope there is more of a lively fourth game, otherwise the match will end up being decided by the play-offs on Monday.

A couple of photos of the protagonists and more tomorrow! 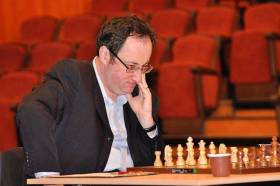 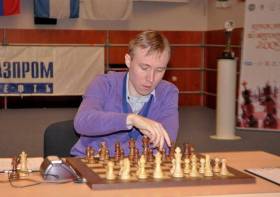