Khanty Mansiysk is a name that is becoming familiar in the chess world as this oil-rich Siberian city again hosts a major event. Those in the know will already be aware that it will also be the venue for the 2010 Chess Olympiad next autumn.

The World Cup is a 128-player knock-out event over seven rounds and three weeks or so marathon for the eventual finalists.

In order to procede to the next round the most direct way is to win the principal phase of two classical chess games, one with each colour. In round one for example, the top fourteen seeds were able to qualify for the second round after winning their two-game matches. The three highest rated of all are Boris Gelfand, Vugar Gashimov and Peter Svidler in that order.

In the case of a tie in a particular match (a win each or two draws) then a series of rapid games are played in order to determine a winner.

Nineteen of the 64 (an appropriate number for a chess tournament!) matches in round one required rapidplay tie-breaks to decide who would advance in the tournament, and who will go home! These are taking place today, on the 23rd of November, whereas those already qualified can either have a rest day or use their time to better prepare for their next opponent. The highest rated player involved in a play-off was Lenier Dominguez from Cuba who scraped through 3.5-2.5 against David Smerdon of Australia.

The biggest seed to bite the dust (16th) was Sergei Movsesian, the Slovakian 2700+ who was already recently in the news when he lost to Ftacnik in the European Club Cup. Not a good month for Sergei!

Judit Polgar won on default as Pavasovic had travel problems and couldn't get to Khanty Mansysk in time, whereas Alexandra Kosteniuk was downed by Mamedyarov.

The other notable female, Hou Yifan (still only 15-years old!) and the youngest competitor, drew her first two games with Arkadij Naiditsch so lived to fight it out in the rapid tie-break games, which she eventually lost 3.5-2.5. This reminded me of her pushing Anatoly Karpov close in Cap d'Agde in another epic match. Some games were still tied after 6 games (two classical and four rapidplay) and so additional Blitz games are then played to split the players. So Li Chao beat Sargissian, Shabalov won against Baklan, Bartel against Grachev, Savchenko downed Shulman and Nyback overcame Andreikin in this manner.

One match was still undecided after 8 games, Tregubov against Akobian, so they had to keep playing pairs of further Blitz games until someone made the difference. Akobian finally won by the remarkable 9-7!

This play-off lasted nine hours and forty-five minutes (a good candidate for the record books!) and at the end the players were so tired that both of them lost winning positions on time and Tregubov even left a mate in one on! The arbiters thus had their 'evening meal' at 01.30am.

Perhaps FIDE will need to re-think their play-off procedure for the future?

Although it seems a shame to have to decide between two players with Blitz games, a winner has to be found at some point in the proceedings! One could also argue that as the World Cup tests the players in the three disciplines, (classical, rapidplay and Blitz) the final champion will have to have universal skills in matchplay!

One particularity of the event is the use of a metal detector at the entrance. Will we see this more often in chess tournaments? 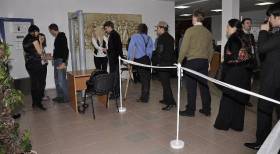 No, it's not the airport!
Everyone is checked by a metal detector before entering the playing hall.
official site

Watch this space for more updates over the coming period, especially when the top players start to clash in early December. Naturally I'll be taking an interest in the games so watch out in the Notable Games section next week. For further details see the