We all know Blitz from friendly games at our club, but few have ever played with so much at stake! The final qualification place for a mega-tournament in Bilbao was in the players' minds as they readied themselves for battle again. On paper, the two were evenly-matched but Kramnik had managed to beat Aronian with Black so perhaps he could have counted on a psychological edge.

The two-game Blitz match (4 minutes each, plus 3 additional seconds per move) finished 1-1 so the 'Armageddon' game (5' for White, 4' for Black who gets draw odds) was required as a decider.

After a win as White in the Slav, Kramnik then lost in the Reti setting up the final showdown. Aronian had White again and stuck to the same opening that was successful a few minutes earlier.

This time Kramnik sacrificed a piece for strong central pawns, a cunning ploy which was too tough to meet at this rate of play. Again Kramnik beat Aronian with black (in another long endgame), just like in round five of the main tournament.

This time he was fortunate as the final position is drawn, so I presume that he won on time. 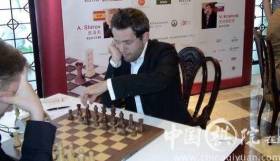 Aronian: it wasn't to be. @ chinaqiyuan.com

The players who will be in Bilbao (in the Spanish Basque Country) from the 9th to the 15th of October: