This is the sixth year running that Peter Leko has taken on a high profile challenger in a short match in Miskolc. In previous years Leko played the following: Adams, Karpov, Kramnik, Carlsen and Anand.

Miskolc is the third largest city in Hungary (after Budapest and Debrecen) with a population of 175,000 and is situated in the north-east corner of the country.

Eight games of rapid play over a few days saw the World Cup winner Boris Gelfand take the initiative with wins in the first and fifth games. Leko's win in game four was somewhat fortunate as it was on time.

Here is a summary of the results:

One could say that the Semi-Slav was popular! 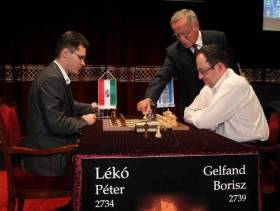 Peter Leko has certainly taken on some of the world's biggest names in these matches, and all of them have been fairly close, but he has now lost the last four.

In general Peter Leko has taken on similar strength opponents as can be seen above from their respective world rankings at the time of the matches.