The Catalan is in fashion, especially with Anand employing it three times against Topalov. A common reaction is to play ...Bb4 followed by ...Be7, but this didn't work out that well for Alekseev against Mamedyarov. However Ponomariov instead retreated to d6 with his bishop, an idea that I am unfamiliar with and one that ultimately netted him the whole point.

In today's eighth round the leader lost and the winners were amongst the lower placed players.

The longest and most amazing game was Akopian against Inarkiev as complications led to White having a queen (and the initiative) against rook, bishop and knight. What a tremendous fight! 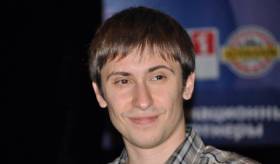 In the eighth round there was a bunching effect and now there are just four players on 'plus one' who share the lead:

Now there is only 1.5 points separating top from bottom. So it's still anybody's tournament! 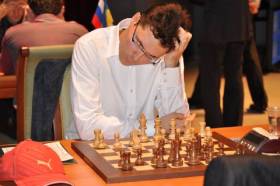