The 4NCL has finished for another season. This acronym coined by the founder Chris Dunworth refers to the Four Nations Chess League (4NCL), the nations being England, Scotland, Wales and Ireland.

There are sixteen teams in the first division, separated into two evenly-matched pools of eight teams. After the first seven rounds the first four in each pool qualify for the elite group (which play for the title etc), whereas the bottom half play amongst themselves to avoid relegation.

The chess world has not escaped recent upheavals in the economy and some of the leading teams have had their budgets reduced. This has naturally led to the sponsors seeking less expensive players and the number of imported stars has certainly gone down on the top boards in the last couple of seasons. However many domestic GMs still compete. One particularity of British chess is the large number of 2300-2500 players, many of whom are not professionals, so certain teams have managed to keep a reasonably high standard without breaking the bank.

The highest-rated competitor, Etienne Bacrot, played only one game this season, but British number one Michael Adams was a regular performer for his new team 'Pride & Prejudice' (based in West London) and helped them finish second.

The name comes from a famous book by Jane Austen which is heavily focused on a female view of the world, and appropriate in that the team is run by an enterprising lady Claire Summerscale (wife of GM Aaron Summerscale), and who in the early years often turned out a largely female team. 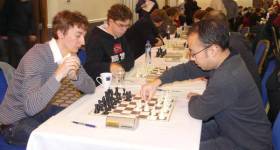 McShane (playing Mah) and Hammer were the top boards in the winning team. @ Meri Grigoryan

The winning team is known as Wood Green Hilsmark Kingfisher-1 (this mouthful is the result of the merger a couple of years ago of two strong teams who were seeking to keep a competitive team whilst reducing costs) who won ten games and dropped only one draw (to P & P).

Wood Green is a leafy suburb of North London and a name associated with strong teams (both in the highly competitive London league as well as the 4NCL) for many years. Hilsmark Kingfisher was a more recent enterprise but established itself as one of the top teams two or three years ago before the merger.

The third placed team, Barbican 1, (a famous arts centre in North-East London) have been sturdy performers over the years and have largely maintained the same group of players together which is one of their strengths.

The leading three teams are all essentially London-based, which reflects the fact that a vast proportion of the leading chess lights live within commuting distance of the capital.

Here is the table of the top pool. Match results refer only to meetings between these teams, whereas results against other teams from the pool stage are only used if needed for tie-breaking purposes.

For more information on the 4NCL official site