The young Phillipino obtained a good opening in the French Defence and Kamsky's attempts at attacking on the kingside fell short. He may not yet be that well known in the west, but he did become a GM at the age of fourteen which is generally a sign of a bright future in store!

Sakaev also lost with White after trying a speculative combination which led to him obtaining rook and pawn for bishop and knight. Vitiugov's minor pieces however proved to be more than equal for anything White's heavy pieces could drum up.

Very few people come back from a loss with White so Vitiugov and So are now heavy favourites to go further in the competition.

Mamedyarov made it five wins out of five against Wang Hao, and the Azeri is now the only player left on 100%.

Boris Gelfand continued on his untroubled way winning a nice game against Judit Polgar. Judit's (dubious?) opening experiment left her queenside undeveloped and Gelfand was able to exploit this by sacrificing the exchange for strong threats and simplifying to a pawn-up endgame.

Vachier_Lagrave also looks well placed to advance as he methodically ground down Yu Yangyi in a Sveshnikov where Black had his inevitable weakness on d5, but without any compensating activity.

Other winners were Ponomariov and Jakovenko, as well as Czech GM David Navara who managed to overcome Karjakin, a mini-surprise.

The remaining eight games were drawn.

Here is how the World Junior Champion won against the rank outsider.

An anti-positional move that soon leads to difficulties for Black.

White now presses down the d-file for the rest of the game and Black has absolutely no counterplay.

Threatening ♖dg3 and Black is running out of space. 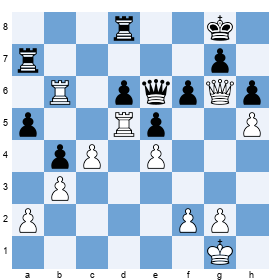 Something had to give eventually!

Finally a photo of the best placed asian player as things stand. 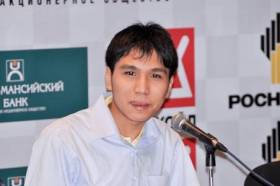 So close to his ticket for the fourth round.
>©official site