Nigel Short's first win came from the Nimzo-indian defence, a line which the Cuban site proudly describes as the 'Capablanca variation'. The curious aspect of this game was that the Englishman left his king 'on starters' and simply got on with his central line-opening play, a tempo having been saved by not castling! The breakthrough came via an exchange sacrifice that left Alekseev tied up and unable to create sufficiently dangerous counterplay. Short had no problem demonstrating how to convert his advantage in the endgame of two bishops against rook.

Bruzon seemed to equalize easily and his control of the open lines on the queenside fully compensated White's extra space.

Leinier Dominguez fianchettoed his king's bishop against the Grünfeld and Nepomniachtchi replied with the most solid symmetrical defence. Although one could argue that White had the better structure, Black's queen was in the white camp and put a stop to any serious winning attempts.

Short's victory takes him back into the pack, whereas Alekseev is now a point adrift. 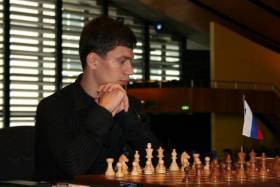