Shirov had already won the tournament with one round to spare, but a further draw enabled him to amass 16 rating points whereas the other three players were all negative in this department.

Aronian was happy to test the leader in a popular theoretical line of the Marshall Gambit. His piece sacrifice is already known and led to him regaining the material with a rooks and opposite bishop pseudo-ending which proved to be drawish.

In the other game, Wang Hao reacted to 5 Bf4 in solid style and played a line which reduces White's opening advantage to nothing more than a nominal space pull. Kramnik couldn't find a way to make progress. 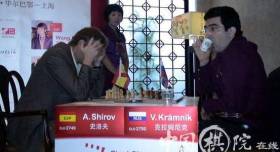 The tie between Aronian and Kramnik will have to be decided by Blitz games.

Shirov's gain of 16 points takes him (provisionally) up from 12th to 6th in the world ranking list. A remarkable leap emphasizing just how impressive he was in Shanghai.

Here is a summary of the chess 'penalty shoot-out' to come and then after this we'll know who is going to Bilbao with Shirov!

More precision on the tie-break: A two-game Blitz match (4' plus 3" increment). If this ends 1-1 then the players must indulge in an 'Armageddon' game (5' for White, 4' for Black who gets draw odds).

More later when the results are known!