Both ShSM-64 and Economist have leading Chinese players in their ranks and their games swayed the match result. Wang Hao won for 64 (against Tomashevsky) whereas Ni Hua lost for Economist-SGSEU-1 against Riazantsev. The other Chinese player involved, Wang Yue on top board for Saratov, had Black against Gelfand and drew a long game. Karjakin was the third winner for 64 against Eljanov.

The Ural team downed the leaders St.Petersburg by making five draws and one win on board five - Ponkratov (2593) beating Zvjaginsev (2643).

Here are the standings after round 6:

The top three teams are as follows: 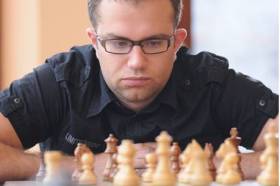 Pavel Eljanov: Four wins and a loss before today's loss to Karjakin.@Wikipedia

The victory on top board for Cmilyte over Zhukova won the match and (indeed as it turns out) the title for St.Petersburg.

A happier ending for Viktorija Cmilyte than the last round of the European Women's Championship!

So a day of mixed fortunes for St.Petersburg: Losing a key match and the lead in the Premier league, but on the other hand stealing the Women's title.

It will help to be able to read Russian as the English version is out-of-date!