Hikaru Nakamura has already played both of his closest rivals (on rating), so is in practical terms the best placed as he can expect realtively easier pairings from now on.

The fifth round pairings are as follows. Five of the 24 players are called Alex or Alexander, so not surprisingly there will be a number of meetings between them, for example on board four with Stripunsky playing Yermolinsky later today.

The winners on boards 3-5, Shulman, Stripunsky and Christiansen (all with the black pieces), join the leading group.

Tha majority of the participants were not born in the USA (14 out of 24?), demonstrating that it is still a country welcoming people from all over the world. Veteran campaigner Larry Christiansen was however home born and bred but has a tough pairing with Black against Gata Kamsky. 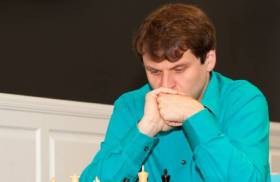