The main question going into the final round was whether the Russians would hold their nerve against the Israeli team who had rather lost their way in rounds 7 and 8.

The USA versus Azerbaijan match pitched second against third and therefore would certainly be decisive for the other medals.

India and Armenia were both expecting to win their last round encounters and thus were serious contenders for Bronze.

As things turned out Tomashevsky and Vitiugov both won with White and thus confirmed Russia's first place.

Four draws including the clash of the in-form players Mamedyarov and Onischuk.

Athanasios Mastroavasilis was the only winner.

The mighty Russian team bounced back from a surprisingly defeat against Greece in the second round by only dropping one further draw against Armenia in round 7.

Azerbaijan scored 22 game points, the second highest, but were only fourth on match points and so were outside the medals.

The final standings were as follows

The World Team Championships takes place every four years and since the break-up of the Soviet Union Russia have always been in the medals.

India, who were only competing because the Chinese dropped out, win their first medal in this competition.

As for the individual performances, the highest percentages on each board are highlighted, on the condition that the player has played at least four games.

The highest performing player of all is Mamedyarov with 6.5/7 closely followed by Nakamura's 5.5/6 on board 1! 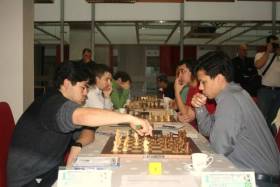 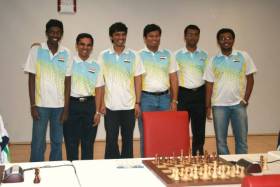