One of the most competitive opens on the European circuit led to a seven-way tie on eight points.

The favourite Alexander Riazentsev was placed ahead of Nadezhda Kosintseva and Leonid Kritz (on buchholz) to take the highest spot on the podium.

The most notable result was perhaps the second place obtained by World No.6 (on the female list) Nadezhda Kosintseva. Not surprisingly, with such a high position, she obtained a valuable GM-norm. Both sisters seem to be on the rise and are challenging each other in the race towards the 2600 mark! 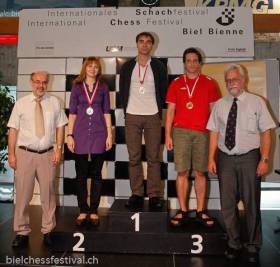 The final Standings of the leading players were as follows:

As the leader board suggests, this was a varied international field as usual (18 nations), with particularly strong French and Israeli contingents this time around. Overall there were 16 GMs out of 115 participants.