Ponomariov's problems arose after he advanced on the queenside and Radjabov obliged him to give up his light-squared bishop for a knight. This rendered the kingside break g3-g4 more difficult to achieve and, indeed when it finally did come, Radjabov had already made serious progress elsewhere. Perhaps the moral is that pushing on both wings is risky when your opponent's pieces are ready to break free.

Wang Yue was able to keep things solid in the Petroff. This was one of these games where any White pressure is insufficient to lead anywhere as there are no pawn breaks in the position. 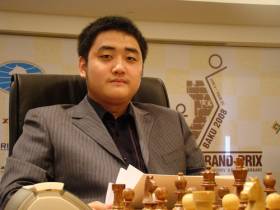 Boris Gelfand played the Moscow variation which enables White to obtain an early initiative for the bishop pair. Gelfand kept his bishops throughout and diffused all of Carlsen's aggressive gestures on the kingside, without ever looking ruffled.

Carlsen has drawn all three games so far, but is only half-a-point off the pace.