Teimour Radjabov played the Exchange Spanish against Mamedyarov and obtained a nagging edge. Later he organized favourable exchanges to leave him with a superior queen ending where Black could only wait whilst Radjabov organized a win.

Ponomariov also won a controlled positional game, as his centralized bishop dominated Gashimov's knight as it pressed down on both wings.

The other games were drawn leaving Eljanov comfortably ahead on 7/11 with two games to go.

In the highlights of the twelfth round, Eljanov is paired against Jakovenko, who by winning could catch the leader.

Ponomariov who has had his ups and downs has Black against Wang Yue.

Furthermore, Gashimov and Radjabov are both on plus one and meet in a game that could be decisive for the Grand Prix qualification spot. 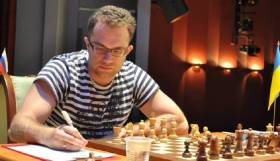 A full point ahead @ official site.