In each of the three final round encounters one opponent had a point less than his adversary and required a win to catch up. Two succeeded: Kramnik and Leko, but Le Quang Liem couldn't manage it.

Ponomariov, knowing that he musn't lose, played a cautious Exchange Variation against the Caro-Kann. However, not only didn't he obtain any advantage, my feeling is that he was slightly worse at one point before eventually obtaining a repetition. 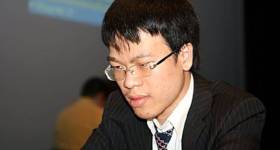 A great result for the Vietnamese player. Who would have predicted that he would end up ahead of the World's Nos.4 and 6?

Kramnik played a sharp line against the Ragozin where White wins a pawn but allows his king to be misplaced in an open centre. Kramnik nevertheless kept control and then mass exchanges led to an ending with all the pawns on one wing where White (always a pawn up) had excellent winning chances in the long run. A dispirited Mamedyarov however lost very quickly. 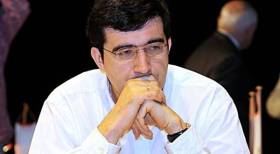 A win enabled him to catch Mamedyarov @ official site

Leko-Naiditsch was another sharp theoretical line. Peter Leko also won a pawn, however in this case Black's activity looked (superficially) to offer enough drawing chances, but somehow the Hungarian consolidated his advantage. After 60 moves of careful technique he could claim his first win.

I calculate that Ponomariov must have won 14-15 rating points and Le Quang Liem 10-11 at the expense of the other four who all lost Elo points.

For more information (and further photos!) see the Official site 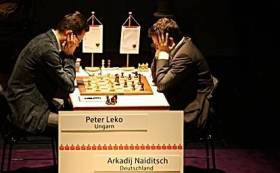