Finally we know the name of the second finalist, who after a rest day tomorrow will play Gelfand in a Classical match (over four games) to determine the champion. Both Boris Gelfand and Ruslan Ponomariov (despite his fairly young age) could be considered 'experienced' and have competed at such a high level before. A rest day is really what Ponomariov could do with in order to get himself ready to affront Gelfand who has the advantage of having an extra day off.

So to summarize what happened today.

Just to remind you here is how Gelfand qualified yesterday from the other Semi-final:

So after a decent run and a handy pay check for consolation we can say goodbye to the losing semi-finalists.

Karjakin will gain from the experience and has plenty of time to come back and go further in future.

The less-well known Malakhov has made a name for himself here and will surely get plenty of invitations to top tournaments in the future. 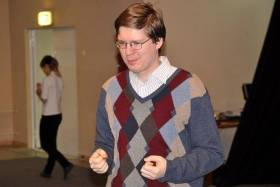 It looked good for Malakhov at one point, but then it got worse and worse!
© official site

Here are some interesting statistics:

So Malakhov is eliminated despite having a better overall percentage than Ponomariov since the beginning of the event. Gelfand having the slightly better percentage of all the semi-finalists.