The young Vietnamese player won a pawn with a neat combination. Then, despite Ponomariov's best efforts to draw by engineering an opposite bishop ending, Le Quang Liem's connected passed pawns saw him home. An impressive display which suggests that we will be seeing more of him in elite tournaments.

The other co-leader fared somewhat better, Mamedyarov drawing with Kramnik. The Russian top seed accepted an isolated pawn, and obtained adequate counterplay by advancing it when Mamedyarov opted to win a wing pawn.

In the other game Naiditsch kept slight pressure but when he eventually won a pawn the rook ending, with all the pawns on one wing, was too drawish.

Shakriyar Mamedyarov leads and is now the only unbeaten player, whereas the bottom three players have yet to win a game.

Le Quang Liem is back on 50% and is only half-a-point behind Ponomariov after today's game. 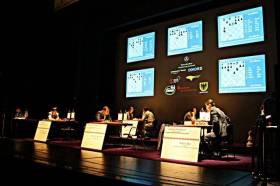 A view of the playing hall © official site.