Naiditsch employed a sideline involving h3 and g4 against the Najdorf and induced complications where Sutovsky's pawn sacrifice didn't impress. Indeed the German kept control throughout.

In a Petroff, Jobava was able to keep a slight space advantage. Motylev reacted in the middlegame with a series of pawn sacrifices, but the Georgian calmly sought an endgame with an extra doubled pawn. He converted his advantage in a rook ending.

Of the draws, Bologan-Rublevsky, and especially Vitiugov-Riazantsev were tough battles with no quarter given. 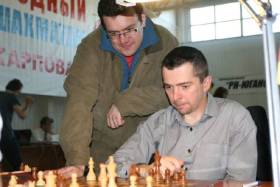 After today's games, Sutovsky drops back, while Naiditsch and Jobava move up to join a large group on 50%. Last year's winner Motylev drops back to equal 9th and is well out of contention.

The moves of the game between Bologan and Onischuk from the sixth round don't seem to be available, but the game was apparently drawn.

That solves part of the mystery!

Jobava trying to keep up with his reflection! @ chesspro