Bacrot and Topalov played into a theoretical line of the hybrid Nimzo/Queen's Indian with Topalov playing noticeably quicker than the Frenchman.

Play in the central arena led to mass exchanges and opposite bishops with no realistic winning chances for either player.

The opening of Carlsen and Anand was akin to a couple of Carlsen games from Bilbao, but here the World No.1 recaptured with the a-pawn rather than c-pawn leading to a rather different structure.

The position was fairly balanced and White's bishop pair not giving him any pressure as Black was so well dug in.

Already in the opening, play revolved around control of the e4-square with Gashimov occupying it and Wang Yue planning to push back Black's active knight.

Then with Wang Yue expanding in the centre, and even offering the exchange, matters became tense. One's impression was that the Chinese player had some initiative, but Gashimov was resourceful and even had slightly the better of the race in the rook ending.

The round two summary:

Yesterday, the only winner in round one was Magnus Carlsen after a surprised Bacrot didn't really cope very well with an unusual variation of the Scotch:

Here are the standings after the second round:

For those who like to follow the games, in Europe it means an early morning and in America a very short night!

where there is an option for English! 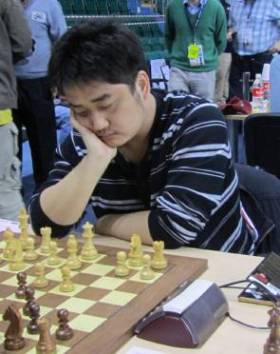 The local No.1 Wang Yue © chessanytime.com