The place to be at the moment is London especially as Carlsen and Kramnik are already meeting, and both are no doubt aware that the eventual winner of this clash would become heavy favourite to take the tournament. This is especially the case in that there are only seven rounds, so there is less time than usual to catch up after dropping behind! Eight-player round robins are as a rule rarities, but as the players involved have been well chosen as entertainers, there could be more going on over the next week than in many a longer event! As there will be other events such as a strong open being organized alongside, many other well-known players and personalities will be in the vicinity during this festival.

The first round puts Carlsen on the right course here with the bonus of a few extra Elo points in the bag. He couldn't have asked for a better start!

Remember than Kramnik didn't lose a game ten years ago when he played the famous match against Kasparov.

In the actual game Black's pieces proved to be awkwardly placed, especially the knight on a5, and once it dared to venture to b3 it became surrounded thus completely tieing up the black forces.

Kramnik was basically out-manoeuvred, and that doesn't happen very often!

Nigel Short will perhaps remember back to the pinnacle of his career when he played Kasparov for the World championship title in 1993.

His highest ever rating was 2712 so his recent form has been close to his personal best.

Luke McShane had until recently been concentrating on the studies, but attained 2656 in 2004, so he shouldn't be underestimated.

This was an extremely long game with plenty of heavy manoeuvring where it was hard to see where a decisive result would come from.

However little by little McShane, who had the more flexible structure, made progress and forced a superior endgame with two minor pieces apiece. He squeezed away (better structure, more active pieces, his opponent's bad bishop) and eventually won a pawn on move 98.

Even then there were significant technical difficulties as Short shored up the barricades.

Finally McShane eroded down his opponent's gritty resistance and Short resigned at 21.50 (time in the UK), a modest total of 163 moves and 7 hours 50 minutes!

Many professional players have never had a game that long! A remarkable start to proceedings.

David has made good progress in recent years and has a tendancy to play actively (even impulsively at times) and aggressively for the whole point.

In contrast Michael Adams has at times seemingly infinite patience and is generally more comfortable with strategic manoeuvring than wild tactics. He is reknowned for having remarkable endgame technique.

A lively early middlegame, including a temporary piece sacrifice by Adams, led to a double-rook ending where despite the players best intentions the draw was always the favourite result.

Nakamura varies his openings widely depending on the circumstances, this fitting in with the view that he is very much a practical player. A talent developed in those long nights where he played endless games of blitz or Bullet (1-minute chess).

I also think that Ni Hua is strongest in the middlegame. Both are tactically ingenious and able to turn the tables with carefully and deeply calculated combinational play.

The rook ending looked very promising for White but Nakamura couldn't find a way to win. I don't know if he missed anything clear (I have a possible improvement in mind, but I'll take a closer look when I have more time!) but I'm sure that Ni Hua will be relieved to have avoided defeat!

The time control of 40 moves in 120 minutes, followed by 20 moves in one hour and then finally 15 minutes plus 30 seconds a move to finish the game isn't particularly fast by today's standards. Soo some games could conceivably last seven hours or more (ask messrs McShane and Short!).

Apparently the Sofia Rules will apply, that means three points for a win and one for a draw.

Naturally this encourages players to be motivated to win, even with Black, but I think it is a shame to 'devalue' draws as, for example, an exciting fighting draw reflects great credit on the players and is more interesting than a one-sided win resulting from a crass oversight. The best way to generate exciting games is to invite the right set of players, and as they have done so already I'm not sure this quirk is necessary!

The prize fund may interest some of you out there. There are 100,000 Euros (before tax!) at stake.

First of all, there are six main prizes:

There is also a Brilliancy Prize of 10,000 Euros (generous, but a further incentive for daring play!?).

There will also be six daily 'Best Game prizes' of 1,000 Euros each (totalling 6,000 Euros). These will be voted for by the general public. The winner will be expected to go through the game for the public/press/TV at the end of the playing session.

A new and entertaining idea but what if the winner has to wait four hours for his colleagues to finish playing...

A winners' pool of 20,000 Euros for each victory. At the end of the tournament the number of wins will be counted and each one will take an equal share of the pot. For example if there are twenty decisive games then the prize will be 1000 Euros per win.

My only comment is it's great to see such a good prize fund, but I'll feel sorry for anyone who say plays exciting chess and ends the tournament in seventh place with five draws and two losses! 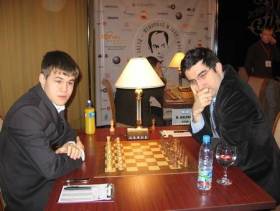 Carlsen and Kramnik have met before! They drew in Moscow.
© M.Savinov M.Glukhovski