The Blindfold games are played in the afternoon whereas the rapid games follow on in the evening. The blindfold set the tone with no draws at all and notable losses by champion Aronian and surprisingly World number one Carlsen, the latter with the white pieces.

In the rapid games Ponomariov won with Black against Gelfand, getting the double and a mini-revenge for losing out in their World Cup final match.

The other double of the day was Ivanchuk's shock 2-0 against Carlsen. 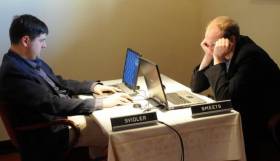 Losses by Aronian and Dominguez leave them stuck at the bottom with 0/2 in the blindfold. Five players managed a win and a draw over the week-end in this discipline.

Carlsen gets off the mark by beating last year's champion with Black. A relief no doubt for him after yesterday's performance!

The recovery continues for the young Norwegian with a second win over Aronian.

Boris Gelfand completed his double over Vugar Gashimov, both Carlsen and Gelfand rebounding from being on the receiving end of whitewashes yesterday.

So after the first week-end the points table is as follows. Ponomariov and Ivanchuk have 3/4 with nobody on 100% in either discipline.