Ponomariov angled for the very solid Berlin system, but Naiditsch advanced his kingside pawns and generated some pressure. White's pawn on f6 enabled the German to tie down his opponent as it supported the penetrating R-e7. White's advanced pawns then became such a problem that Ponomariov had to sacrifice a piece. However by eliminating all of White's pawns he obtained the defendable Rook versus Rook and Bishop. This ending is notoriously difficult to defend but Ponomariov used the so-called 'second-rank defence' (which works because of a stalemate trick, see the game in the attached file) to thwart Naiditsch's winning attempts.

Mamedyarov played a solid line against the Slav where he obtained the bishop pair, but at the cost of having broken pawns. Black's position seemed fine but when the position finally opened up, White's advanced passed pawn tipped a messy position in his favour. 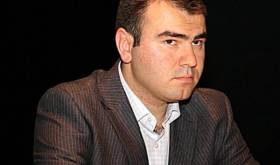 It's an unusual leader board at present as the tournament is split into two distinct groups.