The rules of this special game are unique:

Carlsen will play on a physical chessboard and have no access to external support whereas the three GMs on the other team will be elsewhere and will make suggestions on a computer.

The three Gms will be Hikaru Nakamura (USA), Judith Polgar (Hungary) and Maxime Vachier-Lagrave (France) who are all noted as particularly useful performers in speed chess. However the drawing of lots has given Magnus Carlsen White. 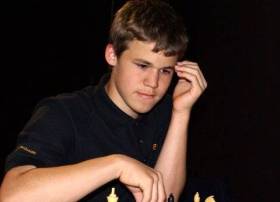 Taking on Carlsen with Black will be tough even for this dynamic trio (plus the World!) @ morrisonworldnews.com

The only contact between Magnus and the trio of GMs will be via an arbiter, who will assist both sides in the running of the challenge and rule on any disputes.

Magnus Carlsen will be based in the Penthouse of the Cooper Square Hotel in New York (very nice thank you!) and a butler (present with Magnus) is the one to play the World team's chosen moves on Magnus's 'physical' chess board.

The game will be played LIVE with strict time controls, as follows:

When Magnus makes his move on his physical board, it stops his countdown clock.

A game operator inputs this move into a computer, which reveals it to the three GMs and the online audience, and triggers the GMs time clock.

The GMs now have 1 minute to determine their response. When the GMs propose their possible replies to the online viewers, their countdown clock stops.

The online viewing public then has 1½ minutes to place their votes.

During this time, a commentary team discusses the three proposals, while the computer counts the votes. When the 1½ minutes are up, the most popular move is shown on the online feed.

The butler in Magnus's suite now plays that move on his physical board on behalf of the World Team. As soon as this is completed, Magnus's clock reactivates and he has 1 minute to make his follow-up move and so on until the (bitter?) end.

To speed things up, if all 3 GMs propose the same move, it gets made automatically without an online vote.

Both Magnus and the World Team are allowed three ‘Extra Time' periods. These grant them an additional 2 minutes thinking time on a particular move (giving a total of 1+2=3 minutes). These are triggered by making a request to the arbiter, who will monitor the additional time and the number of ‘Extra Time' periods taken.

Still following I hope(!), here are some additional rules:

1. Violation of the 1 minute rule: If any player has not made his move within 60 seconds, that side automatically loses 1 ‘Extra Time' period.

In the case of The World Team, this also happens regardless of which of the 3 GM's run out of time. This means that the same player could use up all of The World Team's ‘Extra Time' periods. How to not make friends with the others!

If any side exceeds the 60 seconds and has no more ‘Extra Time' periods left, that side loses the match!

Both parties can request a draw at any point during the match. In the event of a draw offer by Magnus, the three GMs will discuss this verbally amongst themselves - it will not be offered to the vote by the online World Team. A majority decision by two GMs will decide acceptance or rejection of the offer.

3. Two or three different moves with the same percentages:

The match will be commentated by the poular GM Maurice Ashley.

For more information and live game go to the 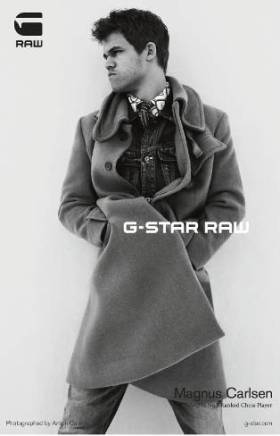