The second round results were as follows:

Before getting down to the day's happenings it's worth mentioning that it doesn't always rain in London! In fact if I picked out six major international cities: New York, Nice, London, Rome, Sydney and Tokyo you may be surprised to find out that of these London has the lowest annual rainfall!

In the aftermath of yesterday's eventful games a number of commentators seem to have the opinion that Nakamura must have missed a win yesterday.

However finding where he went wrong is less obvious!

Have a look at the latest Analysis of the Week (sorry, subscribers only!) and you'll see what I think.

In the McShane-Short epic, I think that Nigel went wrong as early (or as late as?) move 85.

Nigel missed his chance to equalize. 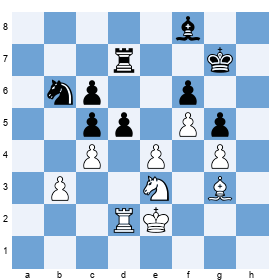 This tangles Black's pieces which now have very limited scope.

Now the point is to stop even a hint of any Black activity. Then there is no hurry in such positions, White just needs to gradually increase the pressure.

Now McShane prepares to invade via d5 and e6 with his king. Black is just a spectator while the plan unfolds.

Now back to today's games starting of course with the leader!

Carlsen maintained his space advantage and kept McShane at bay on the c-file whilst gradually turning the screw. Despite valiant resistance Carlsen got there in the end and takes a clear lead in the tournament. 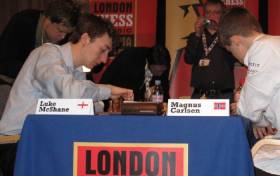 The leaders fighting it out!
© official site

Kramnik bounced back from his first round loss with a comfortable win over Ni Hua today.

In the Slav with ...a6 (Chebanenko Slav) Kramnik played a sharp line which is not considered by theory as dangerous for Black, but the complications turned in his favour. Clearly some home preparation that paid off! He had no problems converting the extra pawn in the endgame.

David Howell drew again with a solid Petroff that Nigel Short couldn't break down. Two solid draws by David so far, but wins are what are needed to get one up the points table.

Michael Adams was in his element today as he kept a small pull against the French Defence due to his better structure. The rook ending a pawn up eventually led to Rook and two connected passed pawns against Rook and passed pawn. These positions generally offer good winning chances and often the only hope to save such a position is to play actively with the king (much as Ni Hua did to save his dubious rook ending against Nakamura yesterday) and somehow the American got his counterplay going just in time. It was Nakamura's birthday today and saving that dodgy looking ending was a reasonable enough present from lady chance!

Here is the points table, bearing in mind that Sofia points (3 for a win, 1 for a draw) are used for the final positions. 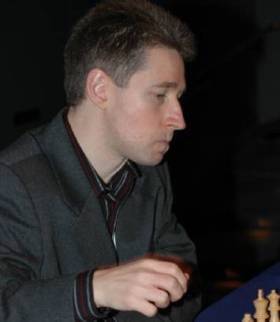 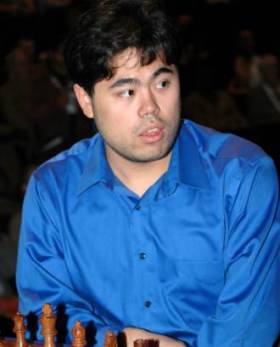