Essentially the other games were fairly cautious affairs and even the most complicated of these, (Vachier_Lagrave-Gelfand) was agreed drawn in a double-edged endgame.

The Frenchman sacrificed the exchange for a couple of pawns to maintain the initiative, but the draw was agreed just as the pawn race was hotting up. 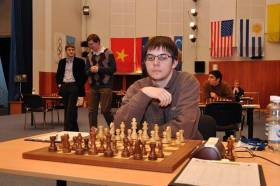 Aggressive play from the World Junior Champion, but only a draw.
©official site

To be fair, Gashimov against Caruana was also quite lively but fizzled out to a draw. Of the others Wesley So kept a small pull, in by far the longest game of the round, but never really looked like winning.

The other games were all quite short with Black obtaining easy equality without much trouble. 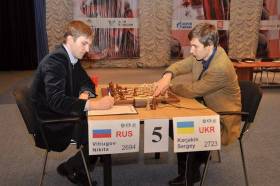 Here is a summary of the first-leg games:

Note that nobody managed to win with White (left-hand column) in this, the first leg of the fourth round.

The two players who lost will now have to win with Black to get to the play-offs, a rare occurrence at this level, so the chances of Shirov or Laznicka proceeding to the quarter-finals are slim.

The following light notes show how they were second best in their matches today.

12...♕d7 has been the most popular move over the years but the move played in the game was introduced by Ivanchuk only a year ago.

Up to now 14.fxg3!? opening the f-file (but at the cost of damaging his own structure) had been played.

Black is guarenteed counterplay against the centre whatever White now plays.

The most ambitious intending ...♘d3...

White's attacking gestures have not given him anything concrete and Black's positional trumps (good queenside pawns, dominating knight) now give him a clear (if not winning) advantage.

A battle of the knights against bishops that isn't clear-cut at all.

This proves to be a slightly risky strategy as the pawns lack mobility and e3 is now a weakness that will require constant defence.

Laznicka bolsters his weak e3-pawn and threatens to capture on d5. However this move abandons the a-file for which he will later suffer.

Taking the a-file turns out to be unpleasant for White.

The most precise although the ending after 42...♕xe3 was also promising.

44...♕e4 is simpler, but the text must have been so tempting!

Or if 45.♕xf2, then 45...♗xe3+ regaining the queen with a decisive advantage (virtually a mating net) in the pseudo-ending.

Toying with his cornered prey.