The rate of play is 3 minutes (plus an incremental 2 seconds) each per game. The 34-player Semi-Final (over the 15th and 16th of September) was a decider for which six players would join the ten pre-designated finalists.

Here is a video courtesy of Europe Echecs.

Those in the six qualifying spots after the thirteen double rounds (which means a game with each colour against the same opponent) of the Semi-Final were the following:

The two women who just missed out on tie-break:

Very close, especially for Zhu Chen who was in sixth place after the first day. 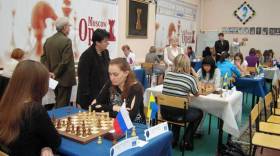 The Semi-Finals surveyed by Gaprindashvili.

Those who didn't have to go through the lottery of the competitive Semi-Finals were the World champion, the top six Elo ratings from the 1st of May, the winner of the Moscow Women's tournament from 2010 and a couple of wildcards, one from the organizer and one from the FIDE president.

So here are the players who will be featuring in the final:

The final will be a double-round affair with 15 games being played each day starting at 15.00 (local time).

The prizes are quite tempting, which explains why just about all the world elite are present with the exception of Judit Polgar who doesn't participate in Women's events, and Hou Yifan.

The Semi-Final prizes were as follows:

You can also follow the games live: Official site

All the action in the final will start at 3pm (Moscow time) which means 12 noon in London or 1pm in Paris. For our American friends the games start at 7am in New York or 4am in Los Angeles. I know you Yankees like Blitz, but how keen are you really?