The game blew open with Shirov giving up two pieces for a rook, but had positional compensation in the form of a pair of passed central pawns. Carlsen rode the storm, eliminated the centre and it was he who tried to win the unusual endgame of three minor pieces plus three pawns against queen and three pawns. He managed to manoeuvre whilst keeping his forces mutually protecting themselves and gradually made progress, but not enough to make the difference. 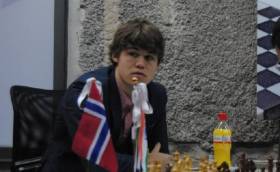 Magnus steadied the boat, and then squeezed long and hard

Anand's Catalan led to an early exchange of queens and after a flourish of pawn chopping the players then simplified further to an equal bishop endgame. Kramnik never seemed to be in any danger and so, with this draw, keeps ahead of the field.

So the standings haven't really changed very much after two drawn games today.

After the rest day which Carlsen and Shirov will no doubt appreciate after one of the longest games of their respective careers, they'll be determined to get up the tournament table. Carlsen has White against Kramnik and I expect him to go all out for victory.

Fourth round pairings for Wednesday:

Anand has another White and needs to win to hope to catch Kramnik, whereas if Shirov wins he will be on a par with the Indian.

Just to remind you, here is a summary of the first two rounds:

There will be a rest day tomorrow (on Tuesday the 12th), but on Wednesday (13th) to Friday (15th) you will be able to watch the games live at the following times: