Here are the details from today's quite long struggles.

Wang Hao opted for a popular solid line against the Slav as e2-e3 followed by an early N-h4 often, as here, gives White a two-bishop pull without much risk. Early activity on the queenside by Shirov didn't blunt White's opening advantage, but despite pressing and sacrificing the exchange Wang Hao couldn't find a way through. The Chinese No.1 spurned a draw on more than one occasion but lost out in a frantic prmotion race. 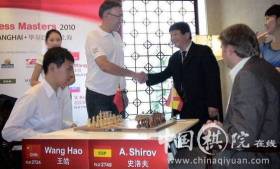 Kramnik was aware that he required a win and he ventured a complicated line and induced Aronian to sacrifice the exchange. Double-edged play resulted but the Armenian seemed to have sufficient compensation, but Kramnik avoided a draw and was able to reorganize and consolidate his material advantage. Finally in the last phase he squeezed a win from the Rook and Pawn versus Bishop and two pawns endgame.

Tomorrow's battles between Kramnik (with White) against Wang Hao, and Shirov (with White) versus Aronian, will decide who joins the Spanish No.1 in Bilbao.

Follow the games live tomorrow from 8.30am on http://www.bilbaofinalmasters.com/2010/