If you can arrange for ten of the World's top thirteen players to compete in the same tournament, then there is a good chance that it will be the strongest of the year. Kramnik came out on top with 6/9 in this Category 21 (average rating 2763.9) event, yes that's right TWENTY-ONE. I didn't know they could go that high!

Kramnik obtained his wins in rounds 3, 4 and 6 whereas Ivanchuk's were in rounds 6 and 7. Carlsen left it even later after starting sluggishly (a bad cold didn't help) but finished strongly with wins in rounds 8 and 9. Ivanchuk had White against Kramnik in the last round, so could have won the tournament if he was victorious. Indeed he had an interesting sacrificial possibility or two, but held back and winning chances were gone. How close was he to turning the tide? Go to the Notable Games section to find out! 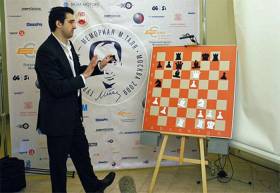 Looks to me like Vassily missed his chance! © Yana Melnikova