The highest rated player Anton Korobov (2657 from the Ukraine) won the main event for the second year in a row. There were 41 GMs in the open-A and the whole event attracted 44 nationalities!

Pardubice is a magnet for many players looking for a total chess experience in mid-summer. The three players on the podium certainly enjoyed their trip as Tikkanen achieved a GM-norm (there were two others this year as well as nine IM norms!)and the young Seturaman continues to impress. 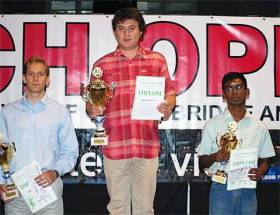 The winners in Pardubice © official site.

There were many other events including four lower-ranking opens, a rapid (the Czech open) featuring Navara and Movsesian (won by Alexander Rakhmanov of Russia).