So the statistics of round 4 make unusual reading: White wins 0, draws 13, Black wins 3!

Yesterday, Mamedyarov against Laznicka, and Svidler against Shirov, virtually assured their qualification and (after drawing) they will be joined in round 5 by Karjakin who outplayed Vitiugov in today's round. He was successful with a fairly recent idea in the Nimzoindian against which White hasn't been able to show anything convincing. 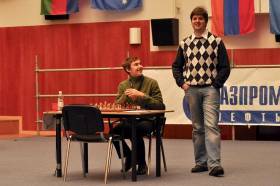 No wonder they are looking so happy!
>©official site

The other five matches have featured only draws, but Ponomariov seems to have missed a win deep into the knight endgame against Bacrot. He will be kicking himself letting the advantage slip, but a few moves earlier Bacrot had a 'book' draw but erred, so neither player will be fully satisfied with their technique! 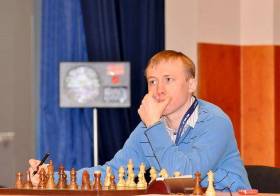 Close, but not quite precise enough to break down Bacrot's resistance.
>©official site 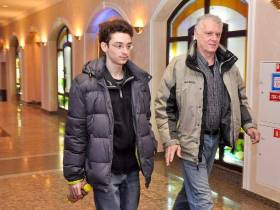 Caruana escorted by his father and ready for battle.
>©official site

Here is a summary of the fourth round matches so far: