Kamsky won the first prize of $10.000 which tops off a largely successful period for him (wins in the US Championship and World Rapid, tempered slightly with a poor showing in the World Open).

There were 159 players in the nine-round swiss which was played with a Classical time limit.

The total prize fund of $60.000 USD attracted eleven other nationalities and a total of sixteen GMs to compete.

Final standings were as follows:

As for norms, two GM norms were made (by Asghar Golizadeh from Iran and Djankhandir Agaragimov from Azerbaijan) and as many as five IM norms were achieved. The happy quintet were Shahriyar Rahmanov, Ayaz Mammadov, Shujaat Orujov, Mushvig Asgarov and Kamal Agasiyev (all Azerbaijani). 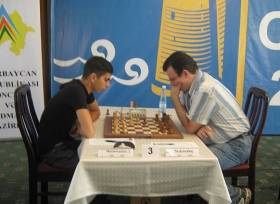