Following the game online, I felt that Timofeev would win the return game, but ultimately the rook ending led to a draw and Jobava was home and dry for second place.

Some of the other players had different priorities i.e. qualification to the lucrative World Cup. The eight lowest placed qualification candidates (on tie-break) had to play a preliminary round. This is what happened:

Tight on paper but Drozdovskij was the most inspired.

The favourite endured, but the young Englishman has had a good run in Rijeka. 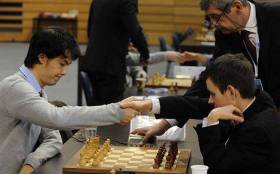 The battle of the Davids!
© official site. 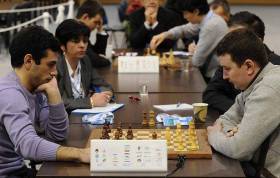 The thirteen (officially called the second round)qualification matches all had a decisive result in the first series of games! Seven of the defeated players won back the second games thus forcing a pair of Blitz games.

Four of these hotly contested matches even went to the Armeggedon game (where White has five minutes, but must win against Black's four minutes).

Movsesian drew first blood in the battle of the 2700s and went through after drawing the second game.

Mamedov had a wonderful tournament up to here and wasn't giving up without a fight. He won back in the second of two long drawn out games and then took the tie in the fourth.

Drozdovskij won his third rapid game in a row today, before drawing out for qualification.

Babula was warmed up by his tight match against Hracek.

The first all-Russian tie. Tregubov had the longest match in Khanty Mansysk against Akobian (19 games!) which he lost, so this must have felt like history repeating itself!

Akopian was on first board in the last round and yet did not qualify! However when the match gets down to the Armeggedon game anything is possible!

The Serb was amongst the leaders midway through the tournament, but losing the first game didn't mean he had to give up on getting in the 23. However he finally went down in the Armeggedon game.

There were only two Greek players in contention and of course they had to play!

So no IMs amongst the qualifiers.

Nisipeanu is more experienced in big matches, that may have made the difference.

A good day for the Socko family!

Here are the players who had a more restful day and a wallet full of Euros:

The knock out competition to determine the bronze medal started with the two lower ranked players playing a preliminary round.

So Dembo then had to play Monika Socko in the next round: 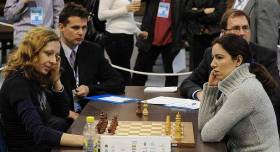 Socko has been in good form throughout.

Sebag has been playing better as the tournament progresses. 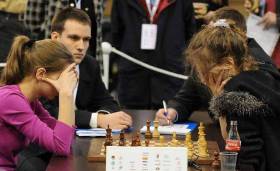 So Monika Socko and Marie Sebag (who drew in the final round) then played their match for the bronze medal.

Nothing against Marie Sebag, but Socko had the higher performance in the main event (2595 against the French lady's 2555) and was leading for much of the event, so she somehow deserves the bronze medal.

Now an apology is required! In fact the information I gave earlier was false as the regulations claim that '22' qualify. In fact the number would seem to be 23 for the men (unless someone has already qualified) and is much lower (I estimate 14, but there is no convincing information anywhere!) for the Women's event and indeed even here the players on 7.5 (not those on 7) were battling it out for places.

I was not the only one to be misinformed by the error on the official site, but it just goes to show that you shouldn't trust everything you read!

In any case here are the players that have definitely qualified before the play-offs!

There were three play-off matches, the first being won by the Russian, giving that major chess country four qualifiers in all.

The second result was a surprise especially after the result of the first game. 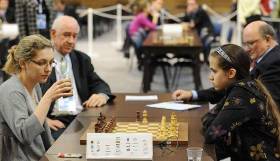 The young Belarus girl (14 or 15?) has had a remarkable tournament with a performance of 2543, and has gained 75 rating points!

A good day for the Poles in general.