Alexander Grischuk is through, although it's hard to understand why opponent Alexander Morozevich didn't try for longer. Two of the Azeris, Vugar Gashimov and Teimour Radjabov, cashed in the advantage of the white pieces, and are in the fourth round.

On the other hand, Shakhriyar Mamedyarov was held by the lowest-rated player remaining, Yaroslav Zherebukh.

The match involving Alexander Moiseenko and David Navara had the particularity of having the longest game of both yesterday and today!

The only non-European qualifier so far is Bu Xianghi, after he beat Abhijeet Gupta.

One of the games of the tournament so far featured the wily Emil Sutovsky against the experienced Vassily Ivanchuk. 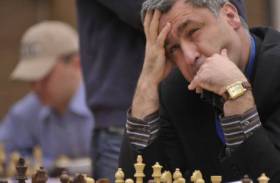 It looked good for Emil, but Ivanchuk saw further! 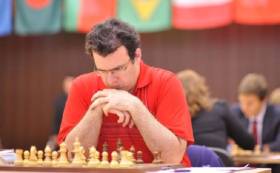 Third and fourth seeds Ruslan Ponomariov and Shakhriyar Mamedyarov are into the play-offs. 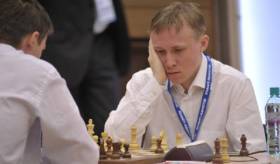 Evgeny Tomashevsky went down to Vugar Gashimov with the black pieces. 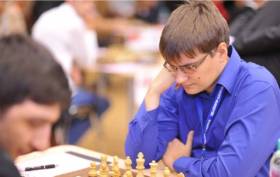 Here are the full results of the third round, second legs. The names in bold are the qualifiers:

Of the six qualifiers so far, four of them (all except Grischuk and Bu) have avoided the tie-breaks in each of the three rounds.

The third round tie-breaks will be tomorrow, the 5th of September.

All of today's photos are from the official site.