Grischuk wins again in Sunday's eighth round of the Blindfold tournament and now has 6/8.

Carlsen loses again with White, this time to Kramnik. 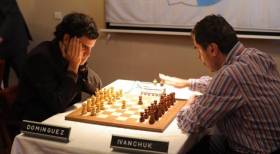 In the rapid event there were four draws and two White wins. Ivanchuk leads at rapidplay with 6/8 going into the second rest day.

Ponomariov got his revenge in the rapids against Svidler.
© official site.

Ivanchuk has 11 points and has one point more than Carlsen with three more days play remaining.

It's very tight between the group occupying second to eighth places.