We have seen a few recent games in the ...Nc6 and ...Bf5 line which Wang Yue used to such effect against David Howell. Unfortunately, not many white players have used my recommendation of 6.Be3, instead preferring to follow the English GM with 6.Na3: 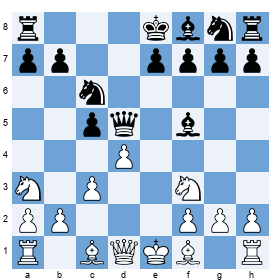 and watch their positions collapse about 5 moves later! Pacher - Istratesceu is another example of this 6.Na3 rubbish.

Go to ChessPublishing to see more of the very latest Anti-Sicilians theory!