To start a game two options are available. Games can be accessed via the two buttons of the interface shown below:

This feature allows you to send game proposals to other players.

You propose one or more game speeds that suit you, the type of game, the range of the Elo rating of your opponents, and you can even propose a particular "Opening" by entering the first moves. 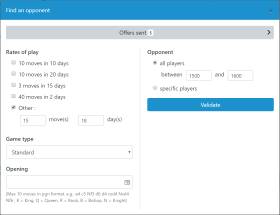 Fill in the form and validate. Here are some details on the proposed fields:

- Game speeds: if you select several speeds, several game proposals will be sent (1 per selected rate).

- Opening: you can start the game with a series of forced moves (in pgn format), which allows you to make use of a precise opening

When a player accepts one of your proposals, you are notified by email.

This page also gives you access to your proposals sent. You can cancel them at any time.

This feature allows you to view the proposals received from other players and to accept or decline them. Upon acceptance, the game begins.