An eventful tournament for the rising Chinese star who suffered from an ailment (suspected food poisoning) early on, but still managed to maintain her momentum until the end and finished as the only unbeaten player.

After this event the gap between her and World No.2 Humpy Koneru will be negligible.

The other big winners in the Elo-stakes were Stefanova and Zhao Xue. However although Stefanova gained a few and Kosintseva lost some points, the Russian will still be well ahead of the Bulgarian on the next list due to their other recent performances.

The players and their world rankings on the July 1st list:

Here is the final cross-table with my estimated Elo-rated changes.

The biggest loser was Marie Sebag who started very badly. As to the favourite Humpy Koneru, her performance was marred by only taking 0.5/2 from the two tail-enders. 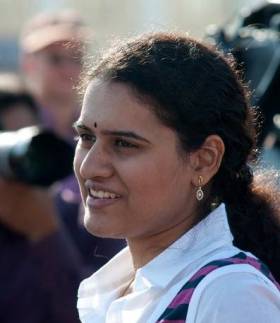 A lacklustre display from the world no.2 @ official site