There were draws across the board today so the standings haven't changed a great deal. Malakhov and Karjakin both won yesterday and have confirmed their semi-final places.

In the notable games section I will be demonstrating in some detail what went on in yesterday's two decisive games.

However in a nutshell, Svidler over-estimated his attacking chances and was essentially outplayed by Malakhov.

Karjakin nurtured his advantage well until the closing stages when on two occasions he offered chances for Mamedyarov to draw, these were squandered to the Azerbaijani's regret and the young Russian won with a neat trick. The rook ending was particularly difficult, especially as time was short, so these innaccuracies are perhaps understandable.

In today's games, Svidler tempted the King's Indian in order to generate winning chances, but although it became complicated at one point he never really looke like winning. At the end Malakhov would probably have played on in other circumstances.

Mamedyarov pressed long and hard, but despite having an extra pawn he couldn't quite convert his advantage. 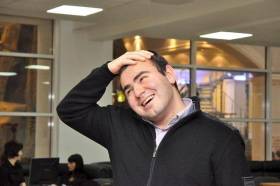 Mamedyarov just couldn't quite do it!
©official site

If we compare these with those of the two qualifiers we note who is the king of rapidplay - Vladimir Malakhov has 8.5/9! 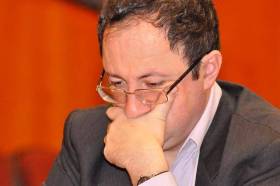 The number one seed is still in there!
©official site