The players are listed above in order of seniority.

Although Mamedyarov is the highest ranked at present, in career terms Ivanchuk is the player who has achieved the highest Elo rating of the field. 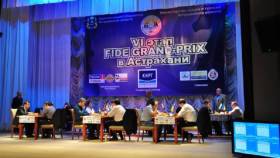 The stage is set. @ official site

The second round results were as follows. Because of the nature of the drawing of lots, one player starts with a double White (Eljanov) and one with a double Black (Ponomariov).

It's rare to see two Modern Benonis in the same round at this level, but even more seldom played is 1.Nc3 as essayed by Ivanchuk!

Five players lead with 1.5/2, these are the four winners from round two plus Gashimov.

Ponomariov beat Svidler with Black, a notable result as he is due the white pieces tomorrow.

For more information on the event official tournament site