The winner of the 25th European club championship was the Russian team Econonmist Sgseu Saratov who won their final match against the Israeli Ashdod Illit Chess Club 3.5-2.5. Five draws and a win by Bu on the fourth board was sufficient.

Mika Yerevan where second. They won comfortably enough 4-2 against Alkaloid Skopje, even though Aronian,L lost on top board to Mamedyarov. SpbChFed Saint-Petersburg drew their encounter against another Russian team Tomsk-400 3-3. Another notable result was that of the Austrian team Husek Wien (lead by Nakamura,H) losing to Ural Svedrdlovskaya 2-4 which meant that Ural squeezed into third place with the help of the 2nd tie-break.

Michael Adams seems to have regained his form in Ohrid.
copyright: official site}}

The title in the 14th European Women's Cup went to Spartak Vidnoe ahead of Club d'Echecs de Monte Carlo in second (due to their superior 2nd tie-break) and in 3rd place Samaia Tbilisi (who nosed out Economist Sgseu Saratov on Buchholz, the 3rd tie-break!).

In their match against Radnicki Rudovci, Spartak were not unduly worried on their way to a 3-1 victory. Monte Carlo Club had to win by 3-1, which they did against Bas Beograd, and thus leapt up to second place.

Polonia Votum Wroclaw and Samaia Tbilisi shared the points, the latter team earning the bronze medal by a whisker. Economist Sgseu Saratov won their encounter against Mika Yerevan 2.5-1.5, but this wasn't quite enough to finish on the podium.

The highest overall performance rating was that of Lahno,K 2772. 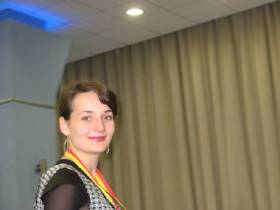